For the common Internet knowledge (we just spent 2 hours hunting for this information):

You must add debian-installer/framebuffer=false kernel boot option to install Ubuntu Hardy on compaq 6910p. Otherwise you get black screen on boot.

I hope this is fixed in Interpid. At least after installing and upgrading packages no tricks are needed.

Update 31.3.2010: This issue STILL exists in Ubuntu Karmic. Looks like i'll have to make a bug report when Launchpad is online again.
Lähettänyt cos klo 2.42 Ei kommentteja:

I just installed IL2 1946 on Ubuntu Hardy with Wine. No problems - it installs and runs just fine.

EDIT: I heard that network multiplayer works also perfectly. I haven't had time yet to test it.
Lähettänyt cos klo 12.49 Ei kommentteja:

Today was a RC show by local rc dealer. We went to see it and after it went to the shop just to see what they have.
I won't explain this too long as we have to leave to a burlesque party soon, but i bought a new RC plane which was on sale. It's a Thunder Tiger Velocity EP, a flying wing much like Zagi but with a small fuselage. I paid 39€ for it, not bad. It's smaller than the aging Zagi 400 i have, and looks nice.
I've been looking for a replacement for my Z400 for long as it's "worn out". It NEVER got damaged beyond repair and i loved to fly it.

Here's a link with specs and picture: 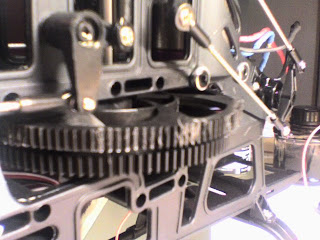 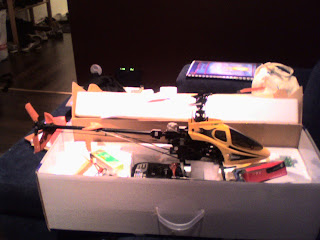 I has new toy! Waiting for battery to charge and wind to settle down. More later..
Lähettänyt cos klo 9.58 Ei kommentteja: 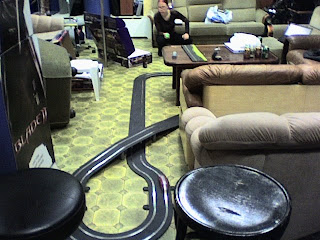 Today i constructed a huge Scalextrix track at our gentlemen's club. We have 2 large boxes of track parts and some more. It was surprisingly fun. I've driven on a 8 slot track also at Nokian Renkaat, but it was nice to create own track. You can see about half of it in the photo - large part of it is behind the table.

There was some really fancy power segment (what ever it is called) which had a lcd screen and could count lap times and total time for number of laps. Unfortunately for some reason i got only one car to work with it. The system also allowed racers to change track on special railway switch like segment. We timed 15 laps with it and i got the best time \o/.

After that we decided to race with 2 cars and changed the 'power segment' to more traditional one and removed the track change switches. Racing was fun & furious although we had to count laps manually.

Some time i got feedback from IRC that i should mount a video camera to a car. Why not?
I taped my old good Z150 phone on a car and set it to record video.