How NOT to add force feedback to your flight stick

This project started a few years ago and has lasted over several iterations.

The first version had a large RC car servo connected to the stick. For prototyping i implemented force feedback only on elevator axis of the stick. I bought a serial servo controller and a usb serial dongle to control the servo and wrote a plugin for X-Plane to control it. It worked well and caused good force, but the stick could not be "relaxed" at all. In slow flight i needed to push or pull the stick quite hard to move it (and the servo). High-speed aerobatics felt really good though, so i knew i was up to something. Unfortunately this was not realistic enough so i ditched this prototype.

I found a few old printers from electronic waste bin at work and looted them for parts. They contained many usable parts such as motors, axles, gears and belts. 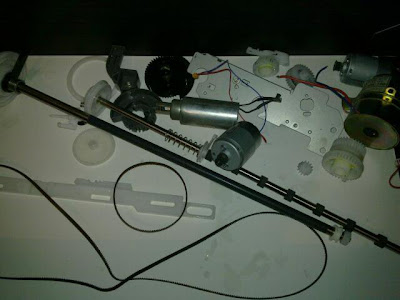 I set up one motor (don't know the specs, maybe 300 size) with a belt to a larger gear to get a sensible gear ratio. To control it i bought a Phidgets USB motor controller board. 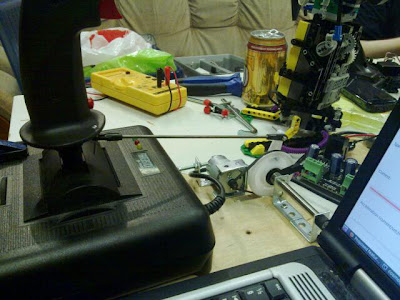 Unfortunately this time controlling the force was difficult - with low power it just made noise and with large it suddenly started moving rapidly. Also the maximum force was not large enough. The belt slipped sometimes, no matter how i adjusted it. It wouldn't work so i ditched this one too.

This time i decided to make a more powerful version of the last prototype. I got some stuff meant for RC planes: a gearbox and a Speed 400 motor. They fit perfectly together and felt mechanically strong. 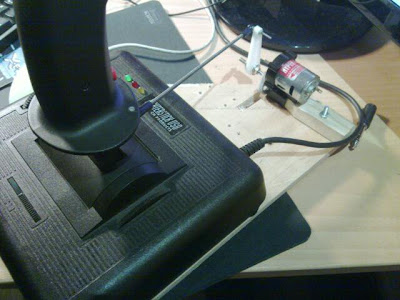 This time there was plenty of power. I hooked up a multimeter to monitor current use and the largest current measured in beginning of tests was 19A. I decided to not to monitor current longer as the multimeter was meant for currents only up to 15A. After a little tuning the thing seemed to work! I removed the centering spring from fighterstick and did some additional testing until smoke started pouring out of the motor. Third fail.

Clearly electric motor is not the way to go. If i used a larger motor, the current would go even higher and over the limitations of the controller board. Using larger gear ratio would cause the same problem as with servo - it would be impossible to cause small or no force.