Velocity EP finished, but with glitches

Yesterday i finished the electrical work on Velocity EP. I installed a 2S2P 1.2Ah LiPo battery in it. It won't be too powerful but should suit the motor that came with the model. I'll upgrade to brushless later. COG was perfect at first try, although i worried it would be too far back.

But there seems to be a problem: with low throttle all servos and motor are glitching. With zero and full power this disappears. Here's a video about it:

My best guess is a faulty ESC.. but if anyone has any better ideas, please post comments.

I'm not sure if i want to fly the model in this state.. The elevons make quite large movements so it might be risky.
Lähettänyt cos klo 3.22 Ei kommentteja:

Long time no post.. So here's a update on my RC stuff: 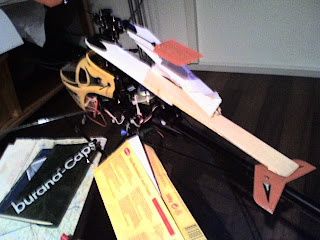 Blades broken, some plastic stuff broken in rotor hub. I already ordered new parts for 15€ or so.
I have ONCE flown it so that battery runs out. 2 times it has broken by itself (main gear strips gears VERY easily) and two times i've crashed. Previously i bent tail rotor axis as it hit a rock.

My flying skills have been advancing.. Instead of just hovering, i managed to do two 360 degree turns. After the second one i crashed. 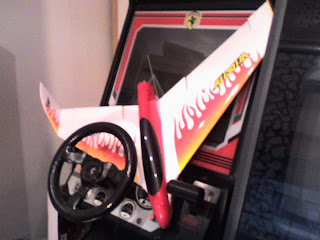 It's not very fast to build for a RTF so i haven't finished yet. Currently it's missing only electronics.
Lähettänyt cos klo 4.50 Ei kommentteja: